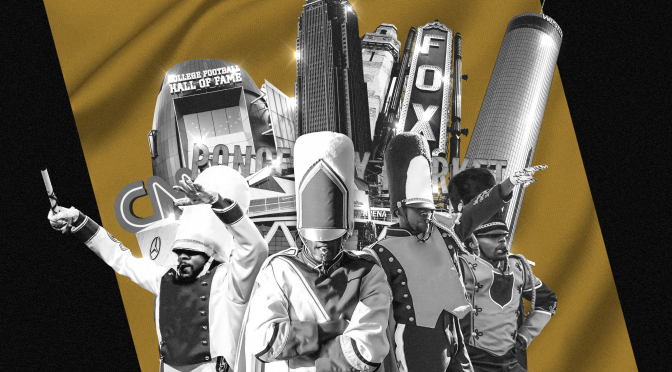 The heart and soul of HBCU culture is scheduled to return to the Mercedes Benz Stadium on February 4th, where six colleges and two high school bands will showcase their musical talents.

“The energy is very high! Bringing The Battle of the Bands back is exciting for a lot of bands, especially for the ones that were chosen,” said Chairman Lindsey B. Sarjeant, Music Department Chairman and Chief Music Arranger for Florida A&M University’s marching band, the Incomparable Marching 100, Chairman of the HBCU All-Star Battle of the Bands.

Hosts for this year’s battle include Rashan Ali, multi-media personality, actress, author, and philanthropist, and KD Bowe, radio personality and in-game host for the Atlanta Falcons.

Bowe is known as an influencer who served along side HBCU All-Star Battle of the Bands, nearly, since its origin. His voice has connected with music-goers nation wide.

“HBCU culture means Black Legacy and a culture of Black youth who are committed to either changing the narrative of negativity associated with their last name or living up to family expectations who have already changed that narrative and will not let them fail,” said Bowe.

Since COVID-19 has been a heavy concern in the past, this year’s showcase will follow NFL protocol for stadium-based events.

“The pandemic killed alot of the enthusiasm because all the universities had their own COVID protocols that prohibited bands from participating in certain events, even football games,” said Sarjeant.

In addition to the main event, the Battle of the Bands will host a college fair at the College Football Hall of Fame with 45 HBCUs nationwide who plan to accept applications and offer scholarships.

About The All-Star Battle of the Bands

The HBCU All-Star Battle of the Bands was created in 2002 to showcase the talents of the nation’s top Historically Black Colleges and Universities to entertain their audiences, raise awareness, and support the music community with scholarships.

To learn more about the HBCU All-Star Battle of the Bands, please visit them online and follow them on social media to stay updated on future events.