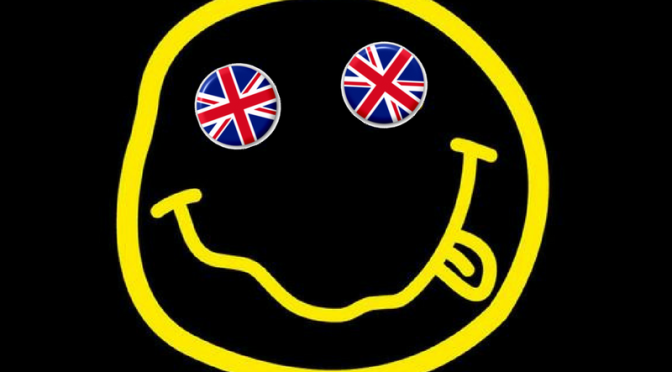 Nirvana- a place or state characterized by freedom from or oblivion to pain,worry, and the external world. (Dictionary.com)

I don’t think I ever knew the word until now. Of course I knew that the word existed, but knowing and feeling are two totally different extremes.

How does nirvana feel? Maybe it’s one of those “old people” feelings when you see something and make an internal connection that brings a feeling of pure happiness. A happiness that doesn’t necessarily bring rib-splitting laughter, but so much happiness that your body physically freezes, and you can do nothing but stare blankly and smile slowly. It tingles a bit; a full body tingle. And maybe it’s the tingle that produces the slow smile. Who knows.

It’s a feeling of being, but not existing. An out-of-body feeling where all is right around you and nothing else matters but that exact moment that brought on that happiness.

Nirvana struck while on a tube (train) ride to central London. I was on my way to see The River Thames, Big Ben, and The London Eye, just a few major landmarks any traveler must see in the UK. While on the train, a group of kids, probably in the second grade or so, boarded with their teachers on their way somewhere on a field trip. The teachers made sure to keep order and assured everyone found their seats or tightly huddled around. That’s where a group of girls took their seats across from me. They were clearly BFFs because it took them a minute to arrange themselves in a way that was best for them all to interact.

Each of the girls were different and you could see small characteristics of the households they came from just by how their hair was done, shoes they wore, and the accent they spoke in. Did any of that stop them from initiating a quick game of patty cake? Hell no. They laughed, pouted, and played joyfully until the teacher signaled for them to gather their things and leave.

Doesn’t seem like too much went on during those few minutes they sat in front of me, and it honestly wasn’t. But during that time, I experienced my first nirvana. The innocence, the happiness, their carelessness of the world around them is what brought on the rare tingle. I knew at one point in my life, I was in their shoes and I began to see myself in them; oblivious, carefree and whatnot. So badly did I want to whip out my camera and hit record. It was as real as it gets! How could you not want to document the realness of pure, innocent life? Simple scenes you don’t even get in movies because its all set up and scripted. But here I am seeing it in real life. It would have made for some awesome b-roll had I snuck out my camera. I wanted to get it on tape, I really did, but I was frozen, remember? Besides, I had to quickly remember that no one was seeing what I was really seeing, and would have looked like a total creep had I started recording these children playing lol.

So that’s when I decided to accept my frozen state, let the moment carry out, and chalk it up to experiencing one of those rare moments of life.

The rest of the ride, I tried to make sense of what just happened; sitting still, thinking with one eyebrow raised. How is it that, I was in a place I had never been, saw something that I had definitely seen before (kids on a field trip), but felt something completely new?

As the train approached my stop, I loosened up, came to my senses, and gathered my things to continue my London adventure.

I left that Piccadilly train with a slightly bigger smile on my face, and now I understand why.

Oh how I wish I could have recorded that moment to relive over and over. But, I guess that’s what makes life beautiful.

One thought on “Nirvana in London”